There’s pretty much only one reason I am willing to travel to the other side of London, and that is for my love of food. There’s also only one reason why I would consider getting up fairly early on a weekend, and that is for brunch; that magical meal that allows me to indulge in my favourite breakfast foods and stretch it over lunch. So when the wonderful Vicky asked me if I fancied trying this amazing Berlin style brünch over in Clapton, I said HELL YES, of course.

I’d actually heard about this brünch from others who’ve said some very good things about it. But it’s not until I got to try it myself, that I realised just how great it was. I literally want to go and eat it all over again. I can already think of people who would thoroughly enjoy it and can’t wait to recommend it to them. Seriously, it was an epic brunch and I was so full from all the delicious food and gutted I couldn’t fit everything in my belly!

Seeing as I live in West London, I was preparing myself for the journey from hell to get there, but it was actually fairly easy. Although, you would never have known in a million years that there was an actual restaurant and event space hidden above that Palm 2 deli in Hackney. It’s such a charming venue and was perfect for the Berlin brünch.

It was so great to meet the lovely Noemi, who is the founder of this Berlin pop up brunch. She described all the homemade elements and I got even more excited to try everything. With food served on platters and tiered stands, the eclectic decor really added to it all. 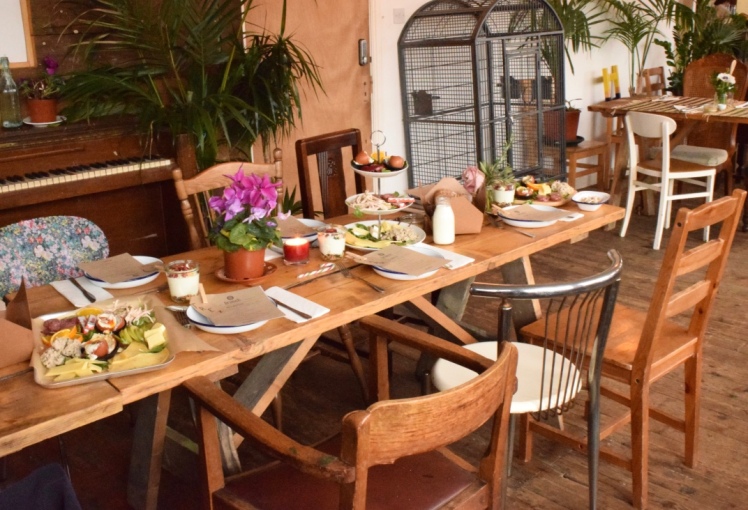 I was seated at a table where the menu had my name on it (which was a lovely touch) and started things off with some yummy orange juice whilst I waited for my brunch buddy Connie to arrive. I couldn’t stop staring at the beautiful tables full of food. There were cold cuts of meat (German Smoked Salami and Fleischwurstsalat) which were the only things I couldn’t eat, but Noemi kindly gave me a a veggie option instead, a lovely pumpkin and honey dip with pomegranates as well as some avocado. 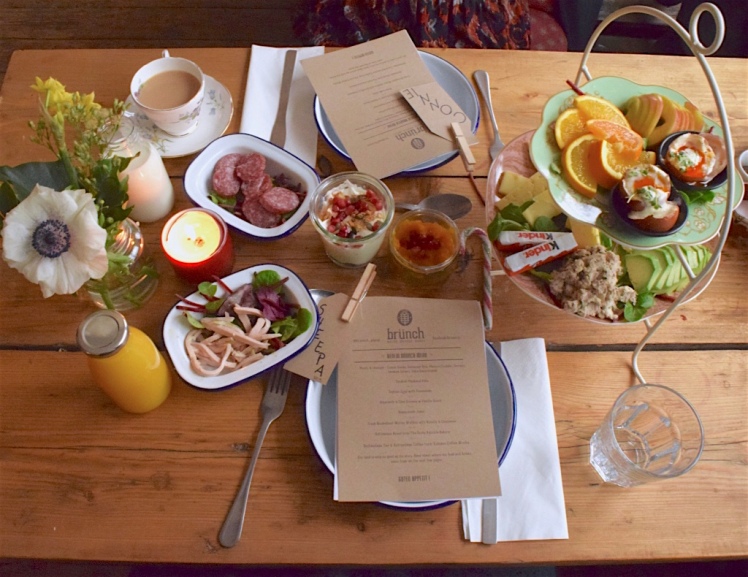 The bottomless bread from The Dusty Knuckle Bakery was so good that I swear I filled myself up with more bread than anything else. I actually wish I lived closer to Hackney so I could go and get some of this bread for myself. 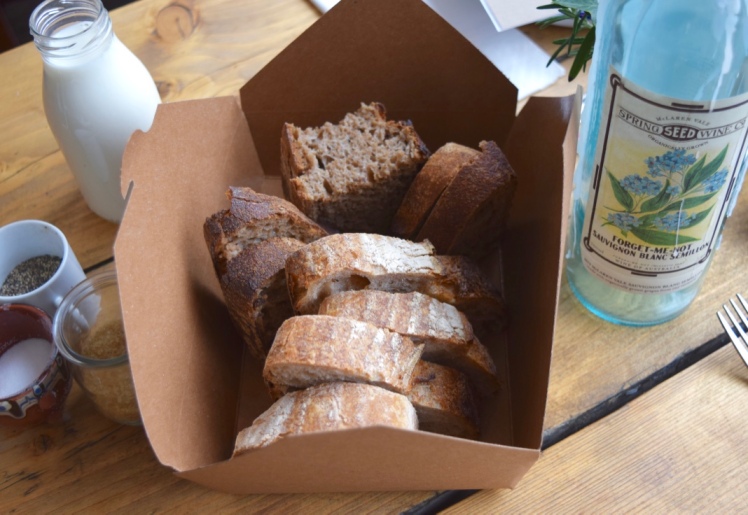 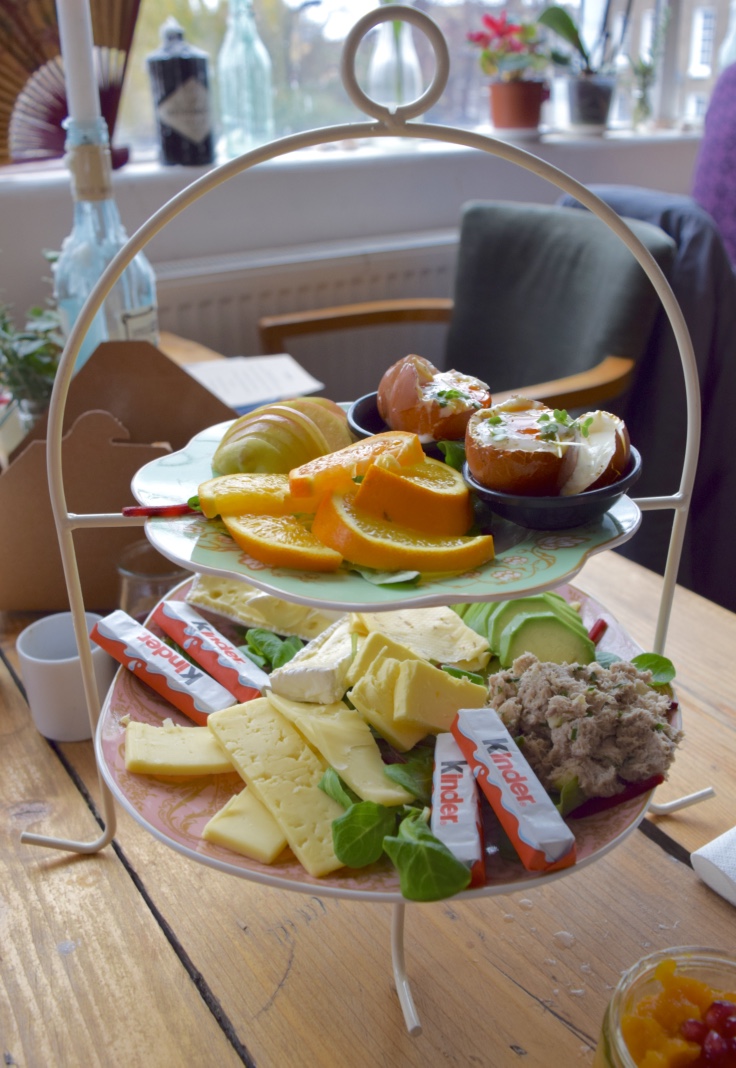 There were a selection of cheeses to try; a Somerset Brie, Mature Cheddar and my favourite, the Cumin Gouda, which I ate so much of! 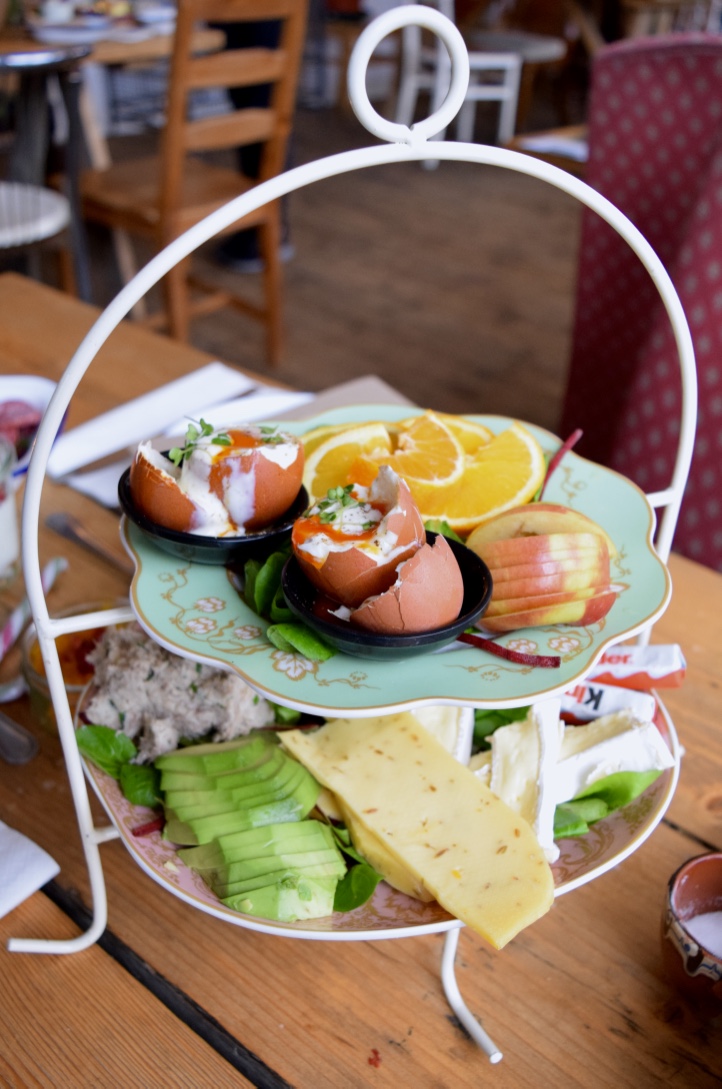 I am still dreaming about this Smoked Mackerel Pate. The photo doesn’t do it justice. I could’ve easily eaten this all on my own and even then, I wish I could’ve taken some home. It had apple and horseradish in it, which took the flavour up to the next level.

And there was some fruit which acted like a good palette cleanser for me, along with the delightful Kinder bars, of course.

I wasn’t sure what to expect from the Amaranth & Chia Granola with Vanilla Quark, but I was pleasantly surprised. Why haven’t I tried quark before? I remember seeing it in a supermarket quite recently and not having a clue what it tasted like, but now I would happily buy this because it was really nicely done.

The ultimate winner of the day was the Topless Eggs with Remoulade. I wish I could describe the flavour and truly do it justice. It was a soft boiled egg with a topping that was similar to something in between tartar sauce and salad cream. It may not sound all that, but it was DIVINE! I want to recreate this at home and dunk all the bread in the world in it. 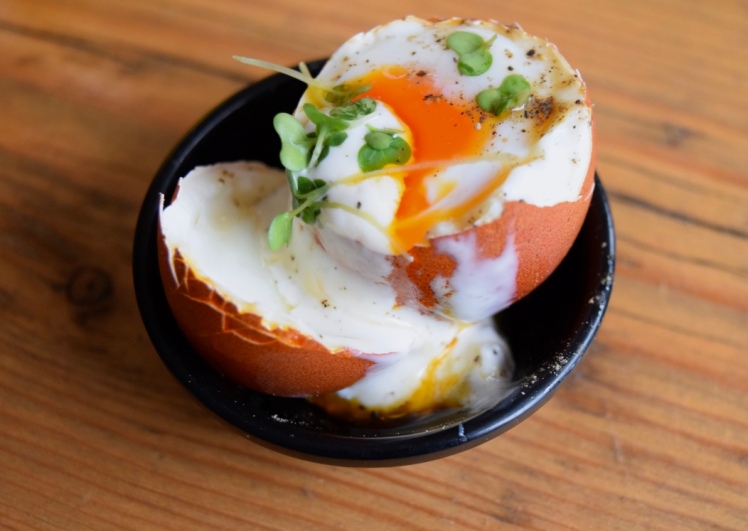 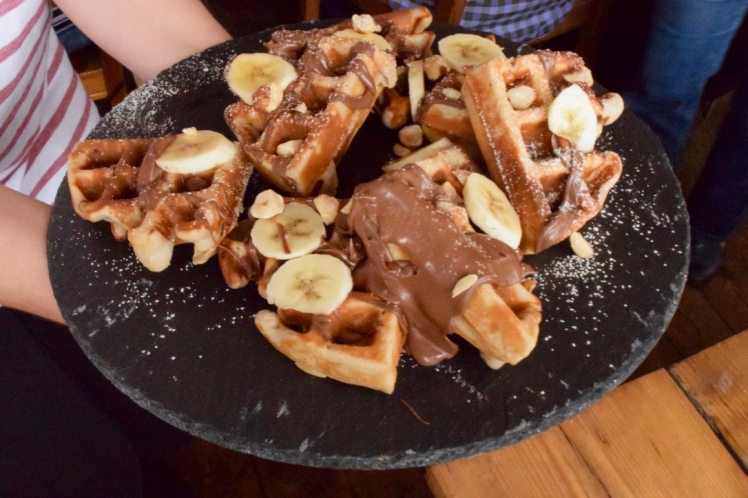 To finish, we tried the fresh Buckwheat Waffles with Cinnamon, Banana and Nutella. Even though I was so full at this point, I had to try these and I’m so glad I did. Who would resist waffles and Nutella? …NOBODY!

Noemi also had a selection of delicious homemade jams and I managed to try the raspberry flavour – so good!

We kindly got to sample the popular German fizzy drink, Club Mate, at the end of our meal. It was the pomegranate flavour and I wasn’t exactly the biggest fan, but I’ve heard it’s something that you grow to like. There was also an option to buy alcoholic drinks if you wished.

This was truly a wonderful way to spend an afternoon over the weekend and I genuinely had a great time, eating incredible food with lovely company. As I said before, I’d totally recommend this to others and would love to come back again. For the amount of food you get and the wonderful hospitality, I think it’s totally worth it!

Brünch pop up will most likely be back in the new year, so keep your eyes peeled for upcoming dates over on their website.

*I was a guest at the brünch pop up, but as always, all opinions are mine.