Now that the weather is turning cold and the drizzly rain has returned, I’ve found that all I can think about is comforting food. So when I had the opportunity to try Jaz & Jul’s incredible hot chocolate, I knew I was in for a treat.

The thing is, I’ve never felt the need to limit myself to hot chocolate only in cold weather, it’s generally my hot drink of choice whenever I meet a friend for ‘coffee’. I’ve tried hot chocolate in many cafes and it saddens me to see how often it’s an afterthought, rather than something seriously thought about by these cafés. 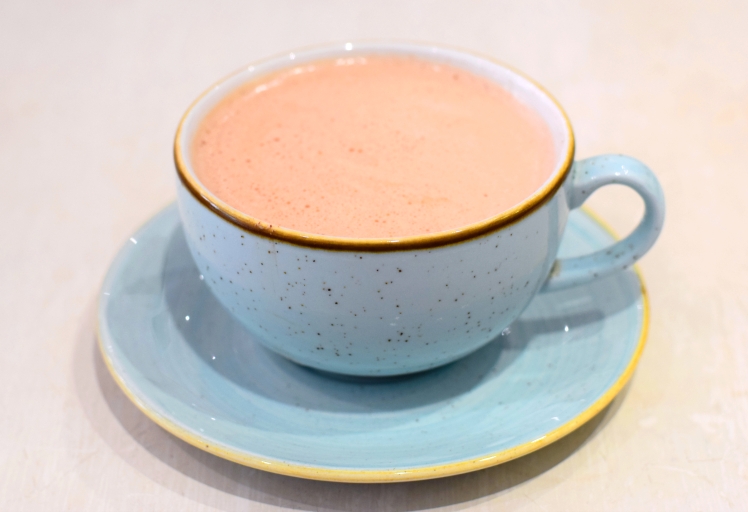 This is where Jaz & Jul’s come in with a game changer… several actually. Whether you’ve heard of them or not, one thing you will learn is that they know their hot chocolate, because they love the stuff! They’ve worked tirelessly to create flavour combinations you’d never have thought to put together with hot chocolate, and you know what? They actually work. This is proven by the fact that they have so many award winning flavours!

They started off selling in the Schoolyard at Broadway Market about 6 or 7 years ago, until they were given a spot in the main market after 2 years of trading there, which is a big deal. They now supply their hot chocolate to over 100 cafes around the UK. They even have their own flagship chocolate cafe, called Jaz & Jul’s Chocolate House, on Chapel Market. I visited with a friend on a Sunday and was pleasantly surprised to see that they were open till 6pm, which must be nice for people in the area as most places close soon after the farmers market ends.

My friend and I decided to go for two different flavours. If you don’t know already, I’m obsessed with cinnamon, and when I saw they had a Cinnamon Rose flavour, I obviously had to try it. I wasn’t sure what to expect from the rose side of things; sometimes it can be a bit overpowering. But actually, it was warming and complimented the cinnamon very well. They’re naturally flavoured with spices and fruit oils.

The other one we tried was the Single Origin Hot Chocolate, 61% Madagascar, and boy was it nice! After a few swirls of the cup (a common issue with hot chocolate when it settles down at the bottom) you could really taste the quality of the chocolate. As I mentioned, a complete game changer. It wasn’t overly sweet, and I detected a fruity undertone, which I loved.

We enjoyed the hot chocolate alongside a slice of Banana Bread and an Espresso Chocolate Cake, which was my favourite out of the two. The chocolate cake had the right level of coffee-to-chocolate ratio and was rich and moist. The sugar topping also helped cut through any bitterness.

I’m really glad to add Jaz & Jul’s to the list of places I can visit with friends in the future. They’ve just introduced a brunch menu, involving french toast and chocolate waffles. And their menu offering is growing as the demand for savoury snacks at lunch is increasing too. They also serve tea and coffee, for those crazy few who don’t fancy the hot chocolate, alongside lots of homemade baked goods.

I’ll be sure to look out for their stand at Broadway Market and might just have to make a trip back to try their brunch soon!

*I was invited to review the hot chocolate and cake at Jaz & Jul’s, but as always, all opinions are my own

Leave a Reply to Food That Makes You Smile! Cancel reply